I recently attended an early career researcher workshop at Tianjin Normal University in China. The aim of the three day workshop was to bring together researchers from the UK and China who were interested in understanding reading development and reading difficulties across the lifespan. I was fortunate enough to receive a fully funded travel grant on behalf of the Newton Fund.

My Chinese experience began in Beijing where I spent some time before the conference started, visiting the local sights such as Tiananmen Square, the Forbidden City and, of course, the Great Wall of China. One of the things that I noticed almost immediately upon arriving in China was the many differences between British and Chinese culture. There is a clear emphasis on collectivism in China, whereby people act on the interests of others rather than themselves. As a result, I found people to be very accommodating and friendly, despite the obvious language barrier between us.

Having spent a thoroughly enjoyable few days in Beijing, I headed south to the city of Tianjin, where the workshop was being held. Prof Simon Liversedge from the University of Southampton kick-started the workshop off with a fascinating keynote on using eye movements to study reading development in English and Chinese. One of the (many!) differences between written English and Chinese is that there are no spaces between the words in Chinese and so researchers have explored how word spacing and the frequency of words affects word learning. Following this, we then heard some more fantastic talks, this time from early career researchers, such as Helen Breadmore and Nina Liu, before it was my turn to give my talk. I talked about the work we have been doing in Liverpool, in collaboration with a reading charity called The Reader. Together we have been evaluating the effectiveness of a shared reading intervention using a randomised control trial and I presented the preliminary findings from the first of two cohorts.

Now that my talk was done and I was fully relaxed, it was time for a workshop on linear mixed effects models! Michael Cutter, a PhD student at the University of Southampton gave us a fantastic introduction into applying statistical modelling techniques to the study of reading. Michael did a great job of explaining everything in a simplified and understandable way so that everyone could follow, regardless of one’s prior statistics knowledge.

Aside from the brilliant talks and posters I saw and heard over the three days, one of the highlights of the workshop for me was the mentoring sessions. This was a chance for early career researchers to informally chat with more senior researchers to seek their advice on publishing papers, forming international collaborations and obtaining grant money. I found this was a great opportunity to speak to both UK and Chinese researchers about the sorts of questions that are always at the back of a young researcher’s mind. 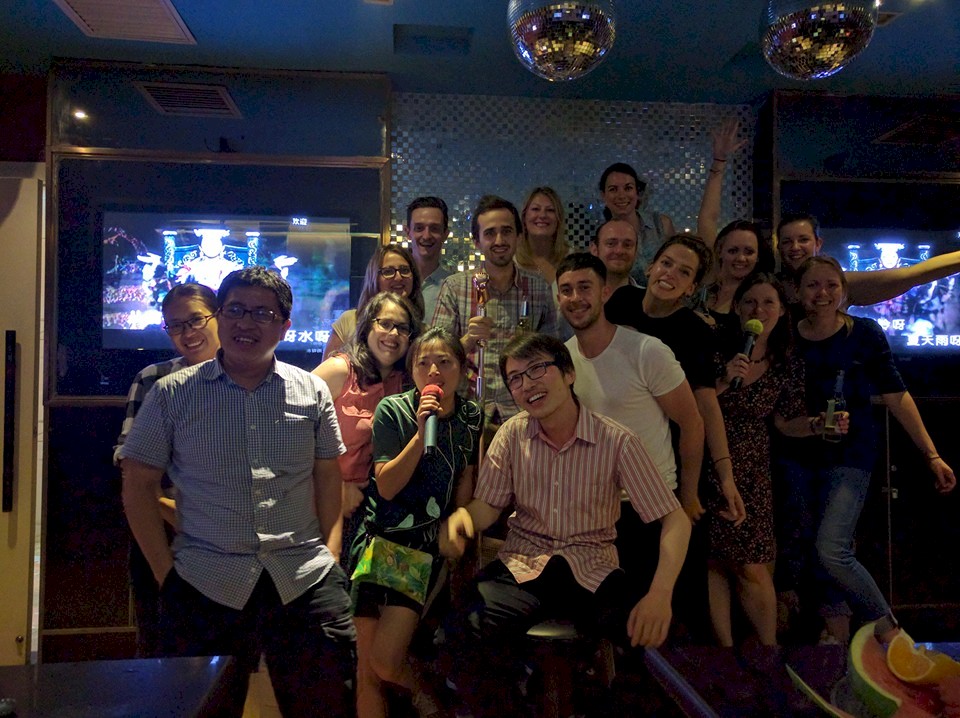 With the workshop drawing to a close, rumour had it that a trip to China’s famous Karaoke bar was on the cards. Armed with low alcohol Chinese lager, we rallied up any willing researchers and set off towards the nearest KTV bar. I sensed feelings of tension and apprehension along the way but as soon as that first Britney Spears record was on, mark my words - everyone was up and having a go. From Papa Roach to Frank Sinatra via Korean pop music, I think we sang every song going on the jukebox. A perfect end to a perfect trip!

Jamie is a post-doctoral researcher at the University of Liverpool, working on an ESRC funded project ‘Promoting children’s language development through family-based shared reading’ with Prof Caroline Rowland and Dr Josie Billington. He did his PhD in Developmental Psychology at the University of Sheffield under the supervision of Dr Mark Blades and Dr Danielle Matthews.