Before they begin to talk, infants use gestures, such as pointing and holding out objects, to display their wants and interests to others. However, it is often difficult to determine exactly why infants choose to gesture. If an infant holds up a teddy to their mum, they may be doing it to intentionally communicate and share their interest, or they may just be repeating a previously learned behaviour without considering what it means. 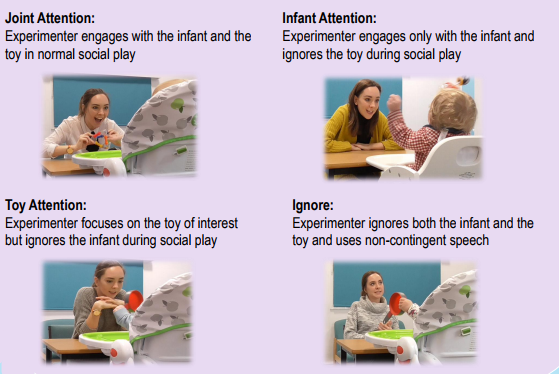 Overall, we found that infants enjoyed interacting the most when the experimenter shared their interest and attention, rather than simply chatting to the infant or describing the object. Therefore by 10 months, infants can use gestures to communicate their interests to others and have some understanding about social interaction and reciprocation. These findings have helped us to pinpoint when infants begin to develop a more complex understanding of the world around them, and highlights the importance of talking about and engaging in an infant’s focus of attention before language develops!

Laura is an ESRC funded PhD student at the University of Manchester. Her research focuses on early communication. She is particularly interested in pre-linguistic gestures and caregiver-infant interaction.