Real languages in the hand: myths and facts about sign languages

Probably, you’ve noticed that sometimes BBC news have an embedded screen where a man or woman is waving their hands energetically. You probably know that this person is interpreting the presenter’s words into sign language. You may also know that sign language is the manual language of the deaf. But, do you know where sign languages come from? Who invented them? How can these sequences of hand movements express meaning? Are sign languages more difficult to learn than languages like French or Spanish?

Actually, there isn’t ‘a’ sign language but rather there are lots of sign languages that may be as unintelligible from each other as Spanish is from Turkish. For instance, the deaf community in the UK uses British Sign Language (BSL) while the deaf neighbours across the channel use French Sign Language (LSF). In the U.S. deaf people use American Sign Language (ASL) which has no relationship with BSL. And sign languages have regional variation too! Within the British Isles, the deaf community of one region may use some signs that differ from signs used in another region. For example, BSL has at least ten different signs for the colour GREEN and the form of each sign will depend on the regional dialect where each variant is used.

We may ask in bafflement: ‘Why isn’t there just one sign language?’ ‘Why can’t someone come up with a single one?’ The answer to this question lies in the word LANGUAGE. Contrary to common belief, sign languages are not the product of a bunch of clinicians getting together and creating a manual form of communication for deaf people. Sign languages emerge naturally and without artificial intervention when a group of deaf people get together and start socialising. Through interaction, repetition and conventionalisation, a manual language starts to emerge and with time, it reaches the expressive power of any spoken language. Sign languages are the result of natural evolution and not the product of a group of scientist in white coats.

Decades of research have shown that sign languages have similar organisation as spoken languages. For example, words and signs consists of smaller sub-components that combined together create meaningful units, and alteration of one of them results in a completely different unit. The word ‘bat’ becomes ‘mat’ when we substitute one single letter. In a similar way, the BSL sign PAPER becomes BROTHER when we modify the movement (see figure). 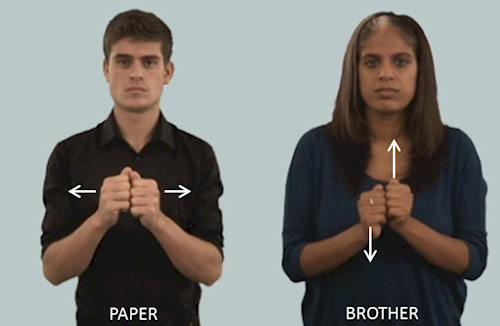 Examples of BSL signs that differ only in the movement of the hands. Images take from BSL SignBank

And sign languages have grammar. They have rules and systematic patterns in the sequencing of signs, and violation of these rules result in an ungrammatical sentence. Deaf signers also use a wide array of facial expressions not because they are enthusiastic narrators but because they are necessary in a signed sentence. The position of the eyebrows may distinguish a question from a statement. The shape of the lips discriminates between words with similar meaning. It may appear that signers move their bodies in random directions but in fact these movements are systematic and are governed by linguistic rules. Sign languages embed grammar in the body.

Are signed languages hard to learn? Not at all, or at least they don’t present obstacles that cannot be expected from learning any language. Learning the Japanese writing system may be a nightmare but probably the pronunciation might be easy. It may take several years to master the German conjugation system but the writing may be quite straightforward. Sign languages may pose challenges in some areas but some other aspects will be relatively easy to master.

For deaf children, however, there is no such challenge. Deaf and hearing infants are linguistic sponges and they learn sign languages with amazing ease despite it being a visual language. If babies are exposed to a sign language from birth they will master the system at the same pace and rhythm as any spoken language. They start off by producing manual babbling, then they articulate their first single signs, then they go on to two-sign combinations and with time they become fluent in their manual language. Sadly, only about 5% of deaf children are born to signing parents which means that the vast majority of deaf kids are born in households where sign language is not in place. These children are deprived from a linguistic model and additional provisions have to be taken to give them access to language. Delay in language input has severe consequences in children’s development so it is strongly advised to provide them with sign language so that they can reach their full potential and minimise delay in cognitive domains.

Sign languages are fascinating linguistic systems that exhibit humans’ unique capacity to express themselves through manual as well as acoustic means. They are grammars that unfold in front of our eyes and allow full communication when hearing is impaired. As such, sign languages should be celebrated as a mesmerising facet of humans’ ability to communicate.

A good introductory book on the basics of BSL and its grammar:
Sutton-Spence, R. & Woll, B. The Linguistics of British Sign Language: An introduction. (Cambridge University Press, 1999)

Gerardo is a researcher at the Max Planck Institute for Pscyholinguistics, Nijmegen. His research explores different aspects related to the acquisition and processing of sign languages.