I am delighted to introduce my Master’s project in Developmental Psychology, which I carried out at Lancaster University in 2016. I was supervised by Dr Katie Twomey, whose research focuses on toddler’s language acquisition and category learning. My main research interest is children’s scale error.

Around two years of age, young children sometimes show a very interesting behaviour known as the “scale error”. For example, children sometimes try to fit into extremely tiny shoes or ride on a tiny car. The very first experimental study of this phenomenon was introduced by DeLoache, Uttal, & Rosengren, (2004). Children’s scale errors are commonly observed when they are exposed to very small toys right after interaction with normally-sized but identical toys which are appropriate for their body size.

Research into the scale error indicates that children who make these errors may be misidentifying the miniature sized toys as the normal sized toys (Ishibashi & Moriguchi, 2017). This may be because some children may not yet have detailed category representations which include size information (DeLoache & Uttal, 2011). From this perspective, the scale error may be associated with the immaturity of children’s representations of object categories.

Therefore, as a part of my Master’s project and the Curiously Project with Katie, we examined the relationship between children’s scale error and their categorical understanding. In particular, we were interested in whether children who are better at learning categories were less likely to show the scale error.

To investigate this, we presented 40 children with a category learning task followed by a scale error task. For the category learning task, we adapted a previous study (Fig 1., Althaus & Westermann, 2016), and used eye-tracking methodology. Children were shown pictures of novel animals as a familiarization phase followed by a test phase in which they saw two completely new images side by side (Fig. 2). Over six test trials we used three test images: a prototypical stimulus, made from averaged characteristics of the just-seen familiarization stimuli; a peripheral stimulus, drawn from the extreme end of the just-seen familiarization category; and a novel stimulus, drawn from a never-before-seen category (Fig. 1). In general in these tasks, if children have learned the category during training, they should be most surprised by the never-before-seen category picture, and look at it for longer than at the just-seen category picture. This “novelty preference” allows us to measure children’s category learning.

For the scale error task, the same children played with three life-size toys: a car, a slide, and a chair and table set (Fig. 3) for five minutes. Then, while children waited in a separate room, we changed these toys for miniature sized versions. When children returned to the original room they were now allowed to play with the miniature toys. We then coded whether they showed the scale error or not based on established coding criteria (DeLoache at al., 2004). 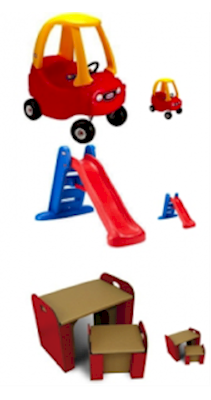 We focused on whether scale error is associated with the ability to detect the differences between category exemplars, by examining children’s responses to the prototypical stimulus vs the completely novel stimulus (novel/prototype trials). Then, we explored whether scale error was related to children’s encoding at a detailed representational level by examining their responses to the category-peripheral stimulus relative to the prototype (peripheral/prototype trial).

Thus, the children with scale error could detect differences in the broad visual properties of category members, however they were less likely to detect the more specific featural changes required for more detailed representations. We concluded that children’s scale errors may occur when they are able to detect broad differences between category members but are not yet able to encode detailed representations. Overall, our study lays the groundwork for future investigations of the relationship between early representational development and scale error.

Currently I am conducting a second study using the same procedure in Japan, as part of my PhD at Ochanomizu University supervised by Dr. Izumi Uehara. This will allow me to compare Japanese children’s production of scale errors and performance on the category learning task with children in UK. If I find cultural difference between the two countries, this will provide deeper insight into how children integrate perceived information with an action response and how children understand categories across countries.

This work was supported by an ESRC Future Research Leaders fellowship to KT and the ESRC International Centre for Language and Communicative Development (LuCiD) [ES/L008955/1; ES/N01703X/1].

Mikako is currently a doctoral researcher at Ochanomizu University, Japan, and was a member of Lancaster Babylab in 2015/16, where she gained a distinction for her MSc in Developmental Psychology.