What’s next? – Guessing upcoming words may be key to how children learn language

People are pretty good at predicting what their conversation partners are about to say next. For instance, if someone says, “I’ll have my tea with milk and …” we can usually guess that the next word will be “sugar”, even before we hear it. Some researchers suggest that we are constantly making these kinds of predictions as we listen to others. Crucially, some developmental scientists think that these predictions could be the key to how children learn language. While these theories – called error-based theories of language acquisition – are very popular among language scientists, we actually have very little direct evidence that ties predictions to language learning. Our new study, recently published in Royal Society Open Science1, aimed to change this.

One of the reasons error-based theories are so popular is that they can explain how children start to understand and use more and more complex language over time, even when they aren’t explicitly taught how. For example, it explains how they learn the not-always-so-easy rules of plurals in English2. When we are talking about multiple things, we usually signal this by adding an “s” to the end of the word. More than one dog is “dogs”, the plural of cake is “cakes”, and so on. But these kinds of rules often have exceptions: when we are talking about more than one mouse, we say “mice” not “mouses”. While children seem to use such rules effortlessly at a young age, language scientists still aren’t completely sure how they learn them.

This is where error-based theories of language acquisition come in. According to these theories, children are actively guessing the next word when they are listening to people talk. For instance, if they hear “Cats are great hunters, they are very good at catching all the … ” they might predict that the next word will be “mouses” based on all the other plurals they know. However, when they instead hear “mice”, an error signal occurs in the brain, prompting the child to reconsider what they already knew about the plural of ‘mouse’. The next time they are in the same situation, they will be less likely to expect “mouses” as the plural of “mouse”, but instead will be more likely to predict “mice”. Eventually “mice” completely takes over and children start predicting and producing this form instead of “mouses”.

This is a very exciting idea, but in practice it is very hard to test. As a result, we have very limited evidence that these kinds of processes actually occur in real life. So, we designed a new type of experiment to test this theory by assessing whether children learn more from hearing words or sentences that they did not manage to predict correctly. 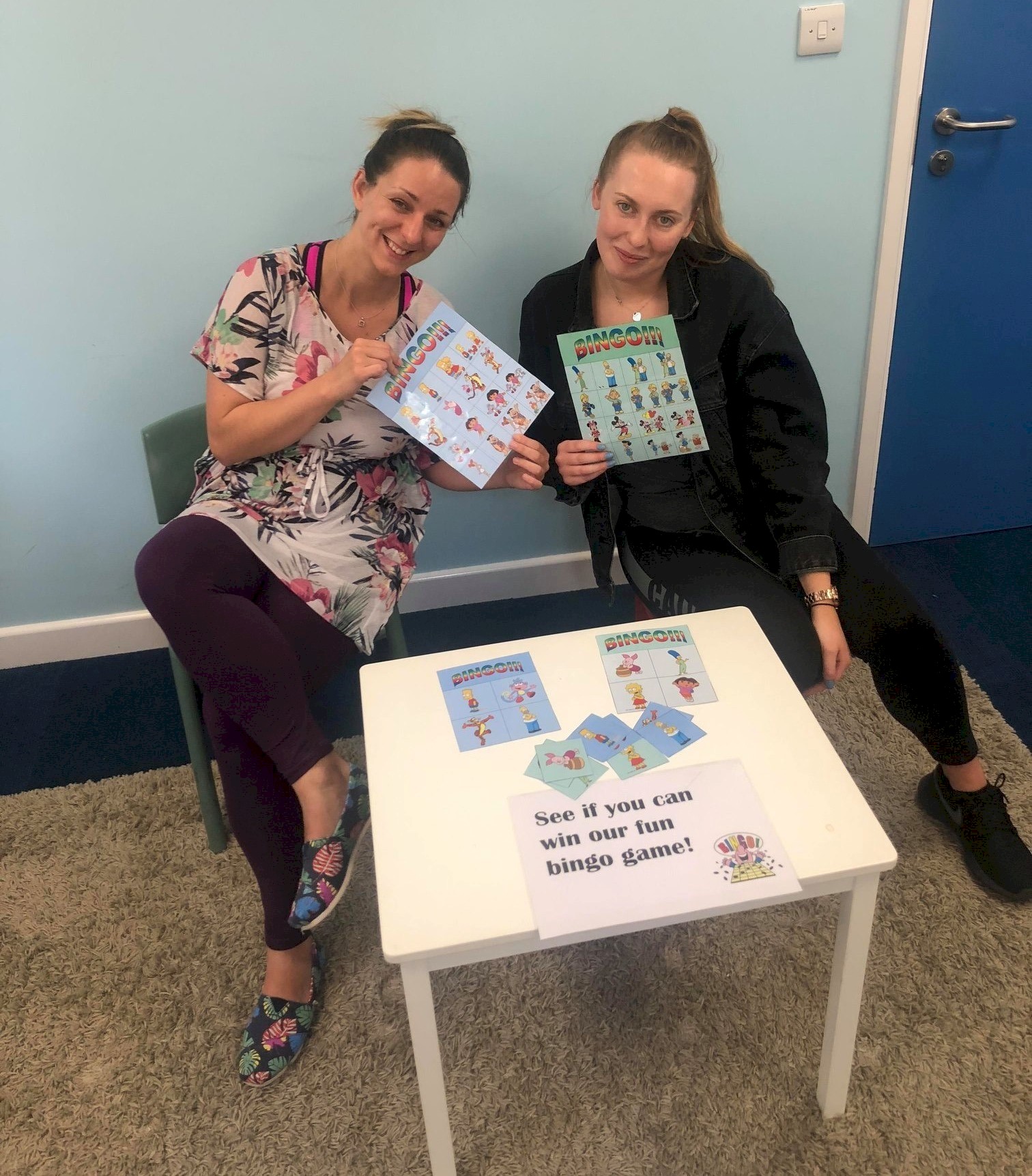 We wanted to make this as fun as possible for the children who took part, turning the study into a bingo game featuring well-known cartoon characters such as Dora the Explorer and Homer Simpson. Whoever managed to collect all their bingo cards first won a sticker. Kids were very good in this game and won most of the time! While playing bingo was really fun, what we were most interested in was how they react to the sentences they hear while we are playing. Did they learn more from sentences where they couldn’t predict the ending – as suggested by error-based theories3?

To test this, we watched videos where the same action can be described with two slightly different sentences. For instance, we watched a video where a box was passed on from Dora the explorer to Boots. This video could be described as “Dora gave Boots a box” (this is what’s known as a double object dative, DOD) or “Dora gave a box to Boots” (this one is a prepositional dative, PD). On average, particular verbs tend to occur much more often with one of these structures compared to the other. If we’re talking about throwing a ball, for instance, we would usually expect to hear a PD form (“They threw a ball to you”). This means that if we heard a DOD structure (“They threw you a ball”), we would probably get our prediction wrong, and be slightly surprised. We used this phenomenon to see whether children started learning by the end of the experiment – if they were exposed to more surprising sentences, did they start to change how they used those structures over the course of the experiment?

After they listened to all these sentences, we measured how often they produced different types of sentences after being consistently exposed to surprising PD or DOD structures. We expected that – according to error-based theories – by the end of the experiment, the children would start to produce more DODs, like “Dora threw Boots a ball.” or PDs, like “Dora threw a ball to Boots.” depending on which they heard in surprising contexts. And this is exactly what we found! Kids who heard lots of surprising PDs started using this structure more often by the final phase of the experiment, and kids who heard surprising DODs did the opposite.

Overall our study showed that when children get predictions wrong, the way they use language starts to change – in other words, they learn. To our knowledge, this is the first time that a study has found direct evidence that children might be able to use predictions to learn about complex linguistic structures. We have a lot more to learn about children’s predictions and language learning, but these results are a promising step towards uncovering the underlying mechanisms of how children learn language.

We would like to thank all participating children for playing Bingo with us and the parents and schools for giving us their time! Our research would not be possible without you.

Dr Judit Fazekas is a postdoctoral researcher at the University of Liverpool.